PestWorld this year was held between 23-26 October at the Swan & Dolphin hotel and convention halls in Orlando, Florida. The very same venue as some four years ago. So in those four years has much changed?
Some things don’t change…
Obviously one thing that hasn’t changed is the event organiser. PestWorld is the premier annual event organised by the American trade association, the National Pest Management Association (NPMA). Once again they said the event had broken attendance records with over 4,000 industry professionals from around 80 countries attending.  This made this year’s event the most well-attended annual conference since its’ inception in 1933. As before, the exhibition is spread over two full-sized exhibition halls, and this year was totally sold out, with around 200 companies with booths – or stands as we would say on this side of the Pond.

Whilst it is best to keep your personal feelings towards the US President to oneself, but what was clear is the upbeat mood of not only the US economy in general, but also the pest control industry in particular. The US economy is booming and unemployment at an all time low. This may well be a contributing factor, as just as is the case in the UK and across Europe, recruiting and then retaining good pest technicians is becoming a limited factor for pest control company growth. To help in this area, the NPMA has added to its suite of committees a Recruitment & Retention committee.

For the event itself, not much changes – it follows a well established pattern
First off is the opening ceremony sponsored by Bayer. As to be expected, Dominique Stumpf, CEO at NPMA opened proceedings and welcomed all delegates. Her message was very much one of sharing, pointing out that pest professionals are very much a community with always someone to help, saying: “We are all better when we work together for the growth of this industry.”

Following Dominique’s comments, the session’s sponsor, Ildem Bozkurt, the USA head of professional pest management and vector control for Bayer, outlined how Bayer is embracing the new digital technology and is using Microsoft’s Internet of Things (IoT) to make pest control more effective, sustainable and precise. Some familiarity here, as this also featured in her talk last year! After this it was razzmatazz time with an entertaining performance by street dancers, Street Breakz.

There are two further general sessions on the two days following. Something new here, as the session on Wednesday was sponsored by Corteva Agriscience – a new company name to many formed from the merger of Dow and DuPont. It’s USA head, Mark Neterer, explained the origin of the company name. In Hebrew, Cor is heart and Teva, nature.

Thursday morning is the turn of Syngenta’s sponsorship. Mike Parkin, Global Head Lawn & Garden Controls, switched the emphasis of is presentation to a global one.

New NPMA president
This annual event also sees the changeover of the presidency of the Association. Former president, Bryan Cooksey, handed on the baton to Dennis Jenkins, president of ABC Home & Commercial Services, a $20 million yearly revenue company, employing 186 people and located in Dallas-Fort Worth, Texas. What also makes his appointment noteworthy is the fact he is the fourth member of his family to hold this post, following in the footsteps of his late father and two brothers. In the USA one must never overlook the fact, that OK – the ‘big boys’ such as Rentokil, Orkin and Anticimex are here and head the market – but the greater overall share is still in the hands of family-owned and run private companies, some of which are now into their fourth generation of involvement. 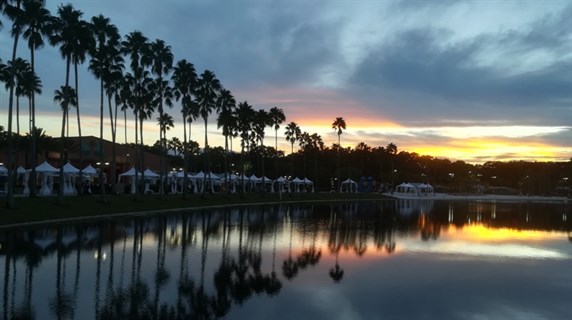 Something new for most Europeans – the hot weather in Florida!