Gary Leek of Pestforce, East Yorkshire has been crowned the first ever winner of the PPC Live Van of the Year competition.
New for this year’s PPC Live, the Van of the Year concept was an opportunity for pest controllers of all persuasions to show off both their pride and ingenuity through their vehicles. There were just four vehicles to judge this year but those numbers will grow if the idea is carried forwards to future events.

Despite the small number there was still plenty of variety. Small ‘car’ sized vans through to ‘minibus’ sized. Small and medium sized businesses and a local authority, exhibited. There was also a mix of the custom built and the hand-made. 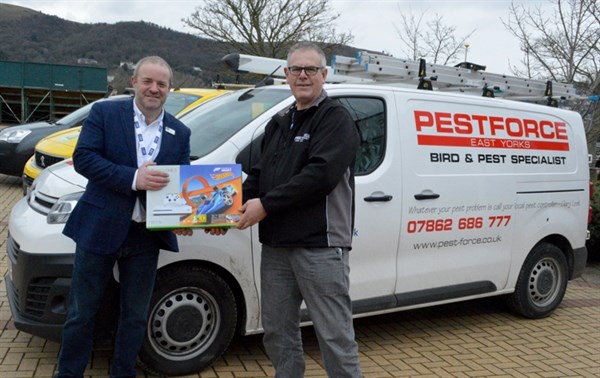 The competition was judged by a small group led by Philip Halpin, BPCA’s Vice President and managing director of Countrywide Pest Management. In presenting the prize, somewhat unusually an Xbox Games Consul (perhaps it is the winner’s intention to hunt down all of those lesser pest control vans in Cyberworld!), Philip praised all of the entries acknowledging that the judging team did not have an easy choice. The judges took into consideration both the external impression created by the van as well as the internal arrangement.

In the case of the winning vehicle the balance was perceived to be just right. The external branding was clear and, internally, there was space for everything, with the racking and its layout well thought through. Being that Gary had created and constructed the internal design himself, the winning van boasted one or two quirks that met the personal preferences of the driver. Well done Gary!

Tell us about your van

Hot on the heels of the first ever Van of the Year competition at PPC Live, Pest magazine is running an editorial feature on what makes a good van and we want to hear from you.

What make and model do you favour and why? Do you customise your own interior or have you found something ‘off the shelf’ that fits the bill perfectly. How do you finance the van – buy outright or lease? Are you stuck with a van that’s not ideal because the boss chose it for you? If you could make one change to your van what would it be? Is your van branded with your company name or plain so it remains discrete? How has your van changed over the years? Is it better or worse today than five, or even 10 years ago?

Please send your experiences to the editor and why not also send us a picture of ‘You & Your Van!’