The 25 delegates represented a cross-section of organisations from food companies and grain merchants to professional fumigators with delegates coming from as far afield as the Republic of Ireland and Belgium as well as across the UK. Chaired by BPCA‘s Richard Moseley the focus for the day was the use of phosphine gas, which is now the only grain fumigant available for use in the UK. 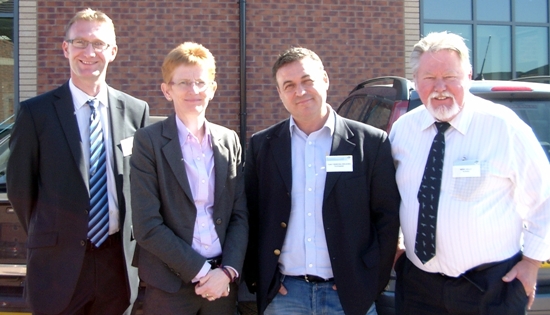 There were three presentations from Acheta‘s Mike Kelly who advises companies on fumigation and regularly lectures on the BPCA fumigation diploma course, from Dr Anne Wilson a medical consultant who now works for the Public Health Agency in Northern Ireland and from a practical fumigator, Tony Pereira-Moleiro of Termapest.

Phosphine is a toxic gas which is more than capable of killing people as well as insect pests so must be treated with respect. It is also now the only fumigant approved in the UK and, as Richard Moseley stressed, if the industry cannot get its house in order and ensure good stewardship, the government has made it clear that approvals will be revoked.

Mike Kelly’s presentation highlighted some of the more extreme consequences of getting it wrong. For example, when the wrong formulation – magnesium phosphide – was selected for a shipment of grain travelling from the port of Marseille in southern France, the result was a dramatic explosion ripping off one of the hatches to the hold just two days into the voyage.

One of the key failings that he has witnessed, especially in countries such as India, is the failure to deactivate the residues left behind after a fumigation. This is a simple process just mixing it with detergent and water but if it’s not done then toxic phosphine gas will continue to be released.

Ensuring fumigations are carried out responsibly in countries other than the UK is outside the remit of BPCA but bad practice is not confined to foreign parts as Tony Periera-Moleiro pointed out quoting a series of incidents he had personally come across.

Dr Anne Wilson from the Public Health Agency in Northern Ireland talked about the toxicity of phosphine gas and the symptoms associated with poisoning. For low levels of exposure these are quite general and non specific – headache, dizziness, confusion, weakness, chest tightening, cough vomiting, diarrhoea, muscle pain – which probably means cases of mild exposure go unreported.

Judged a success, BPCA plans to hold a second fumigation conference – look out for details when available.

A more detailed report from the day will be included in the March & April (issue 20) of Pest magazine.