The Ruddington Grange Golf club, just outside Nottingham, was the venue for the first of this years On the Road days organised by NPTA. Held on 20 February, around 60 delegates gathered for what was a very instructive and practical day.
Unlike the event held at the same venue last year, when the ‘Beast from the East’ made its presence felt, the atmosphere both indoors and out was warm and cheerful.

First to speak was Iain Turner representing NPTA. His talk centred around labels and the changes currently underway. “Labels are changing and will continue to change,” explained Iain, “but it is the users’ responsibility to keep abreast of changes and always to read the label before application,” he stressed. Most in the audience would, hopefully, have been aware of the changes on rodenticide labels, and if not the Campaign for Responsible Rodenticide Use (CRRU) Code of best practice – rodent control was an excellent place to check anything out, as is the CRRU: Guidance on permanent baiting. Iain pointed out that the guidance these documents contain are effectively legal requirements as each are referred to on rodenticide labels.

The recently announced changes on the label for Ficam D were also highlighted by Iain and several of the practical implications were raised by the audience.

Introducing the second speaker, John Hope said: I’d rather have a visit from the tax inspector than an inspector from WIIS.” (Wildlife Incident Investigation Scheme). This proved to be unfounded as Martin Ball, from WIIS, which comes within the remit of the Health & Safety Executive, proved to be both engaging, refreshingly pragmatic and well aware of many of the issues faced by technicians in the field.

He explained the objectives and working procedures operated by WIIS should an unexplained wildlife fatality occur, but reminded all those present that they only had access to what are in effect poisons as they are trained professionals, so must act accordingly. Just as Iain had also done, he stressed the importance of making, and then keeping, good records of decision processes and treatments.

The ever increasing professionalism of pest technicians was highlighted by Stephen Jacob, CEO of BASIS, the organisation which runs the BASIS PROMPT Register. There are now over 5,000 PROMPT members, and interesting their average age is 45.7 years. Numbers are likely to swell further, as from April 2019, anyone wanting to join NPTA will first have to prove that they have committed to professional development by joining a CPD register, with PROMPT nominated as the chosen organisation.

Sean Byrne from distributors, PestFix, detailed how pest control is in effect a distress purchase and how professional technicians can best utilise their valuable time, whilst Laurence Barnard from Killgerm provided the ‘commercial interlude’ when he gave an amusing, and often frank update, of new products on their range.

Practical sesions after lunch
To keep delegates on their toes after the hearty lunch, there were three practical sessions. Sean Byrne demonstrated Agrilaser, Simon Whitehead of Pakefield Ferrets addressed rabbit control techniques and David Mills of ATEO (Airgun Training and Education Organisation) spoke about airguns, the different types of ammunition and the impending threat of licensing requirements.

Exhibitors on display
Surrounding the room was a series of small exhibition stands from manufacturers and distributors – an opportunity to look at the products and share a joke or two.

This very information day is just the first in the series of one-day events, free to NPTA members, to run throughout the year and around the UK and Ireland. Venues include: Manchester, Belfast, Portlaoise, Durham, Falkirk, Bristol, Tonbridge, Farnborough & Birmingham. For the detailed programe click here. 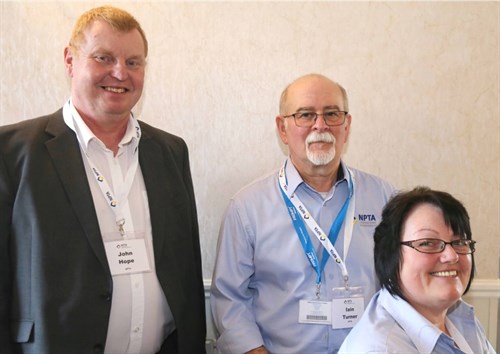