Annual General Meetings (AGMs) are pretty boring, formal affairs but they do give members the opportunity to ask questions of their management board and executives. With very few members attending the National Pest Technicians Associations (NPTA) AGM on Wednesday 20 February, is it fair to assume every member is now entirely happy with their Association?
Yes, controversy was largely avoided at this year’s NPTA AGM and Open Forum. Unlike the two previous events where there was plenty of discussion about the need for continuing professional development and the format it should take, the 2019 Forum only saw one critical comment – could the music at the Pest Control News (PCN) dinner following PestTech be a bit quieter?

Whether you agree, or not, probably depends on how old you are but, let’s face it, the average age in the pest management industry is definitely not 20 something. To be fair the PCN dinner is nothing to do with the NPTA. However NPTA vice-chair, Sabra Everett, does have some influence, given her role at PCN publishers’ Killgerm, Sabra, who found herself chairing the meeting when, at the last minute, chairman Adam Hawley was unable to attend, neatly side-stepped the issue asking members to put their concerns in writing so that she could follow them up with PCN.

In this context it is interesting to note that the chairman’s written report to the AGM for the year 2017/18 pointed out that board members had a combined 216 year’s experience within the industry. (Editor’s note: Now, almost a year later that will be 224 years). They continue to use this vast knowledge and experience to represent the industry.

Chief executive officer John Davison commented on the association’s website which has been having some virus-related problems. Until these are resolved a basic website is being displayed. We’ll bring you more on this when we know it.

Also of interest in the report from the chairman was the fact that  John Davison together with Sabra Everett and Steve Hallam attended all nine board meetings in the year whilst Adam Hawley only managed four. Perhaps it was the discussions leading up to the sale of Adam’s business that kept him otherwise engaged!

The accounts were accepted by the meeting and accountants, Nixon Mee, reappointed. There being no further matters to report the AGM was done and dusted in record time. 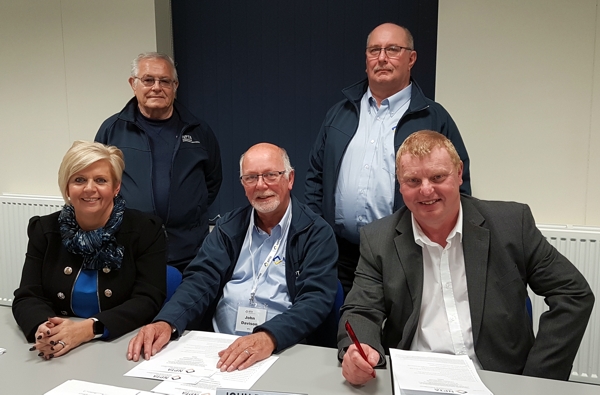