A concerned pest controller, who is also a grandfather of two baby girls, had become increasingly worried about the number of foxes visiting his garden. So he set up his own experiment and filmed what happened.

Obviously aware of the case of the twin girls in East London who were attacked by a fox in their cots in June 2010 (see the Pest report), ”Dave” a pest controller from South London decided to conduct an experiment.

This report comes from the online TV channel Fieldsports Channel and using their own words:

Dave put a buggy in his garden one evening, put a dead piglet in it wearing baby clothes and played the sound of a baby crying through an MP3 player. He borrowed a friend”s video camera to film whatever happened. Then he sat in a room with a view of the garden and waited.

The first piglet lasted an hour. Several foxes came to look at it. The outside light came on but that did not put them off. Then one of them reached forward and grabbed it. At that point, the outside light went out and, shortly afterwards, the battery in the borrowed camera died. Dave switched to his own video camera, put out another dead piglet dressed in another set of baby clothes, and waited some more.

This time, a fox grabbed the ”baby” under the light. It urinated on its kill then pulled off the baby-grow and discarded it. 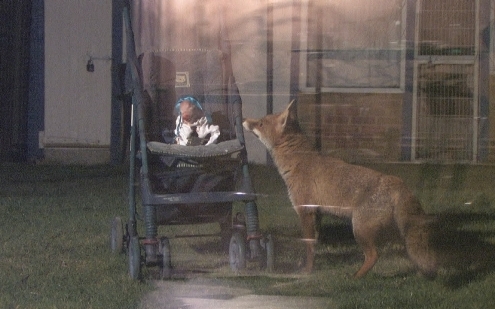 Fieldsports Channel presenter Charlie Jacoby says: “These foxes are well-fed, mature animals that are clearly dining off dog food put out by some of Dave”s neighbours.

“We are showing this film not because we are trying to monster foxes but because we are trying to monster the people who regularly feed foxes. There are people who believe in a Fantastic Mr Foxy Loxy fantasy and think they can be best woodland friends with foxes. These are wild animals. Feed them and it makes them brave enough to attack you. And that is not their fault – it is your fault.”

This time it was a fake baby. Next time it could be the real thing.”

Pest controllers commonly use recordings of a rabbit squealing to attract foxes by. These do sound remarkably like a baby crying. “Some experts thought the twins we attacked by a fox attracted by the smell of their nappies,” says Charlie Jacoby. “We believe it might be sound as well as smell.”

Dave says that in total, a dozen foxes visited his garden that night. Two of them had a fight. The one that took the second piglet is a mature vixen of two-three years old.

To view the film of the fox taking the ”fake baby” click here. © Fieldsports Channel