The colour supplement of the most recent edition (8 January 2012) of the Sunday Times included a six page article all about the urban fox. Pest control professionals from Kent-based B&D Pest Control feature.

All originally looks promising. The article headline is “Vermin or victim.” Then the introductory paragraph for the article states: “They steal our rubbish, eat our pets and have even been known to attack children. In return, we hire pest controllers to trap them and shoot them. Is this a just war?” 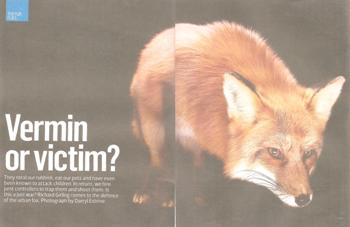 Commenting on the article a very disappointed Danny Thatcher said: “My partner in the business, Brian Redpath and I, were contacted by The Sunday Times and were assured this was to be a fair and balanced article. We organised a full day out for the reporter and photographer. We visited a client with a fox problem and he spent considerable time explaining why control was necessary and why we were there. Not a word of this is included.

“We thought things had gone well – they were keen to find out about what we did, the atmosphere was very cordial and the photographer must have taken over 300 photos,” explains Danny. “Yet none of this has come across – what has been printed is entirely one-sided,” concludes a very frustrated Danny.

What is positive though, as a direct result of the article, Danny has had the opportunity to put the record straight with interviews on both Radio Kent and also LBC.

To read the article in full for yourself – click here. (3MB)