At a press conference held on 8 May in central London, the Antarctic island of South Georgia was officially declared to be rodent free. This is a position it was in originally, two centuries ago, before the invasion of escapee rodents from the sealers and whalers ships that set up business there.
Great news certainly – but maybe more encouragingly is that this good news story, as opposed to all the bad news we continually get fed, has caught the attention of not only UK and overseas national and regional press but also national radio and TV. This included an interview with Alison Neil, chief executive of the South Georgia Heritage Trust  perched on the red settee of BBC Breakfast.

From a pest control perspective it puts into a very positive light the role of rodenticides. Without rodenticides, all supplied by Bell Laboratories, there would still be rats. And these rodenticides were used on an island with an extremely high wild bird population. At the press conference, when challenged on rodenticide dangers to the wildlife, or more appropriately the risks of secondary poisoning, the reply was they were aware there might be some co-lateral damage but viewed the benefits gained greatly outweighed any risks posed. The rodenticide bait used exclusively was specially formulated and packed brodifacoum bait manufactured by US-based Bell Laboratories – a large percentage of which was donated.

Opening the press conference, Philippa Foster Back CBE, chairman of the Scottish-based charity, the South Georgia Heritage Trust (SGHT) delivered the news we were all there to hear – that South Georgia is now rodent free.

How it all started
Dickie Hall, the Habitat Restoration project director explained how the SGHT started planning this ambitious project in 2008, with the aim of reversing two centuries of human-induced damage to the island’s wildlife, so that millions of birds could reclaim their ancestral home. The Trust launched the pilot phase of baiting in 2011, followed by a second phase in 2013/14 and a third phase in 2015/16 – as reported in Pest magazine.

Following international best practice, more than two years after the last baiting work, a comprehensive survey was essential before the island could officially be declared free of rodents. A further six months was spent on South Georgia by ‘Team Rat’ searching for any signs of surviving rats using a combination of detection methods. Over 4,600 inert devices, including chewsticks and tracking tunnels, were deployed and checked. The very best rodent detection experts were also brought in especially: three highly trained ‘sniffer’ dogs and their two skilled female handlers (see Pest magazine report).

The Trust, along with its US-based counterpart the Friends of South Georgia Island (FOSGI), raised £10million to finance the entire Habitat Restoration Project, securing financial and in-kind support from numerous individuals, foundations, businesses, and government, including £885K from the UK Government through DEFRA and the Darwin Initiative.

Hope regarding other alien invasive species
Lord Gardiner, Parliamentary Under-Secretary, DEFRA said: “The UK is proud to be custodian of the precious and unique biodiversity of 14 overseas territories, most of which are island environments, like South Georgia, that are highly vulnerable to environmental change. The last ten years has seen a step-change in how the UK responds to invasive non-native species and the rodent eradication work completed by the South Georgia Heritage Trust is undoubtedly among the most remarkable of recent island conservation efforts. This successful project gives confidence and offers hope for invasive alien species management around the globe.” 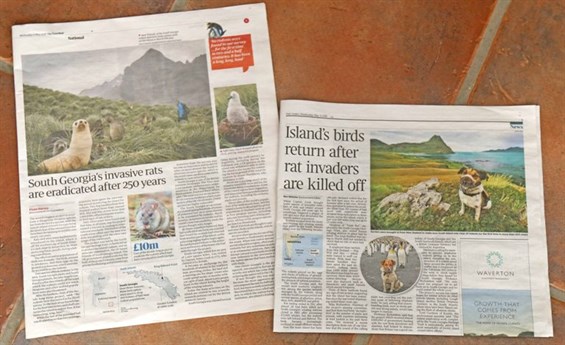 The story also appeared in a very wide selection of international titles, such as New Scientist, National Geographic, the Japan Times, the Smithsonian and conservation titles such as Island Conservation and BBC Wildlife Magazine.