It was a very full house for the rodent control session held on Thursday 7 March, day two of Disinfestando 2019 in Milan. The high attendance level was proof, if it was needed, of the importance of rodent control and the desire among pest professionals across Europe for information on what can and cant be done to combat infestations.
The significance of rodent control internationally was further underlined as for this session the organisers had arranged simultaneous translation meaning that your roving Pest reporter stood a fighting chance of understanding what was being said and what new advice, if any, was on offer.

For those of you who have never had the pleasure of donning the headphones and listening to a translator it’s an ‘interesting’ experience. How they manage to listen to the speaker at the same time as telling their listeners what the speaker has just said, is mind blowing. And, when the subject matter is something as technical as rodent control it can lead to some unusual descriptions. On this occasion there was a lot of talk about dispensers and anti-clotting products but it wasn’t that difficult to work out – bait boxes and anticoagulants!

Interestingly, almost all of the simultaneous translators that your reporter has come across at international events are female – what do they say about multi-tasking!!

So what was there to learn about rodent control at Disinfestando. Unfortunately the first speaker had been taken ill, which was a shame, as Dr Alberto Baseggio was down to cover the Biocide Regulation 528/2012 on the use of rodenticides including product labelling and ‘permanent’ baiting with toxic products. Labelling requirements are pan European – the reclassification of anticoagulants as toxic to reproduction for example but the approach to permanent baiting allows for, shall we say, ‘national interpretation’.

Practical advice
The first sepeaker therefore was Dr Dario Capizzi from the Lazio region’s environment and natural systems department, who is well known throughout Italy for his rodent expertise. His paper was very practical. He first addressed the benefits of pulse baiting and how it can be used to reduce the amount of toxic rodenticide introduced into the environment. Whilst this technique has been around since the early 1980s it has not been widely adopted in Italy and indeed, he said, is often misinterpreted. For example labels in Italy prohibit the use of pulse baiting in landfill sites but, he maintained, there is no reason for this. In his opinion it is a useful technique which can control difficult rodent populations and even remove the need for permanent baiting.

He went on to look at the practical implications of using the lower strength (ie 25ppm) rodenticides now coming onto the market following the toxic to reproduction reclassification and asked should professionals use these lower strength products? The answer: It depends!

The availability of other food is a key consideration. In areas of high food availability it is likely that rodents will not eat enough bromodialone or difenacoum bait to get a lethal dose. But it may not be that simple. There is evidence that when there is less active ingredient in a bait the rodents may eat more of it. For bromadialone however data (Meehan 1984) suggests that rodents actually like the taste and in trials ate more bait with the active than they did bait when no active was added.

Changing perceptions
Consultant Dr Ugo Gianchecchi presented a series of images taken in the course of his work demonstrating poor practice, dirty, beat-up vans, scruffy pest controllers and poor quality equipment. He contrasted these with the American approach – professionally branded vehicles, smart staff uniforms and professional equipment. He did so to point out that the image and status of pest management professionals in the USA is so much higher than the image of pest controllers in Italy (or indeed much of Europe) where they are commonly seen as rat catchers or bait box fillers. He suggested that if this is to change, the whole industry needs to up its game and invest time and effort in its image.

The urban ecosystem
Concluding the session was Professor Dino Scaravelli from the University of Bologna. Professor Scaravelli explained how the urban environment is now an ecosystem in its own right and a very complicated one at that. Humans are the only species that adjust their environment to suit them, rather than adapting to a natural environment. As the percentage of the world’s population living in the urban environment has grown the pests, particularly rodents, that live alongside people have also thrived. The predictions are that many more people will become urbanised with, by 2030, 60% of the global population living in towns and cities.

He maintained that, to stand a chance of managing rodent populations in the urban ecosystem, will require a systematic approach with information exchange, assessment and validation of actions taken. This needs a new mindset for the industry. At present there is often a unit approach – solve the problem and move on.

Professor Scaravelli suggested an adaptive management process was the solution: 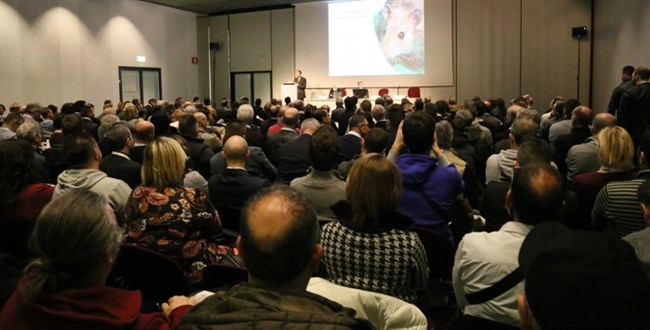