There might not have been too much new (and available now) to record in the exhibition, but after having a look around there were numerous booths displaying digital monitoring and reporting systems ‘in development’.
Just like the old adage about London buses – you wait for ages, none come, then suddenly several arrive all at once. This is exactly the case when it comes to this latest management device – and it fits perfectly with the mantra faced by the industry of having to do things ‘smarter’.

Although there are variations between the products, the principle remains the same – remote rodent/trap monitoring, followed by the collection and transmission of data to a variety of platforms for management analysis. The days of technicians spending vast quantities of their time simply bait box checking is soon to be a thing of the past.

Certainly in Europe, about the first out of the starting gate was Greentrap Online followed by the eMitter Beep system from Futura and the Wedge system sold by Killgerm.

It would be unfair to describe in depth the systems seen, as the developers were keen to point out that what was on display was very much a prototype system – but what was shown can’t be that far from the finished product. We will just have to sit tight and await the final launches – whenever that might be.

Shown below are a few we spotted. Also in develoment is a system called KritterSense from mouse trap experts, Kness.

Robots to take over?
If you really want to look into your crystal ball, the Mem Robotics stand showed where pest control might end up – performed by robots! On display were robots capable of performing mosquito, bird or security activities – some were even solar powered, 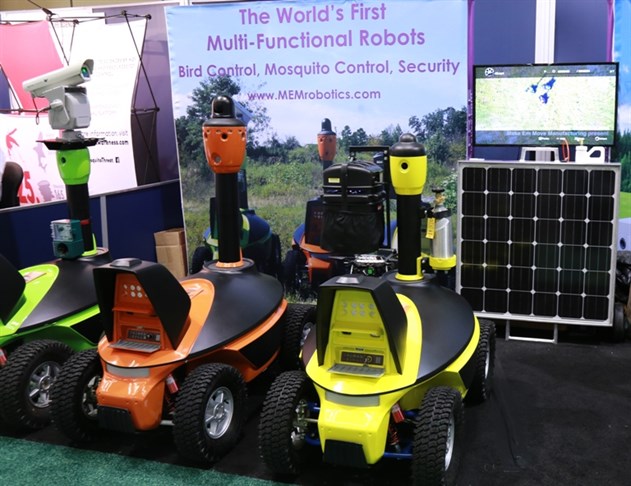