Russell IPMs achievement of its second Queens Award, this time for Innovation, was officially recognised at a special gathering at Northrop Hall Country House Hotel near Queensferry, North Wales on Friday 21 December.

The event was attended by employees and guests who heard the Vice Lord-Lieutenant of Clwyd, Mr Lloyd FitzHugh, read the official citation and then present company directors Dr Shakir Al-Zaidi and Diana Al-Zaidi with the commemorative crystal bowl.

Mr FitzHugh said that it was a huge honour, privilege and delight to present this second Queen’s Award and that it was an amazing achievement to win two years running. He was particularly pleased to see such an innovative, forward thinking and dynamic firm here in North East Wales and to be able to blow the trumpet for the region.

Explaining how for the past five years Russell IPM has re-invested 25% of its annual profits in R&D – a huge commitment with involvement in collaborative work into intelligent monitoring systems as well as the company’s own R&D effort, Shakir added: “This award didn’t come cheap or easy.” He too emphasised the importance of teamwork and recognised the efforts made by all employees. He concluded: “The bottom line is that to survive in this business climate requires innovation, innovation and more innovation. We have to re-invent ourselves every single day.” 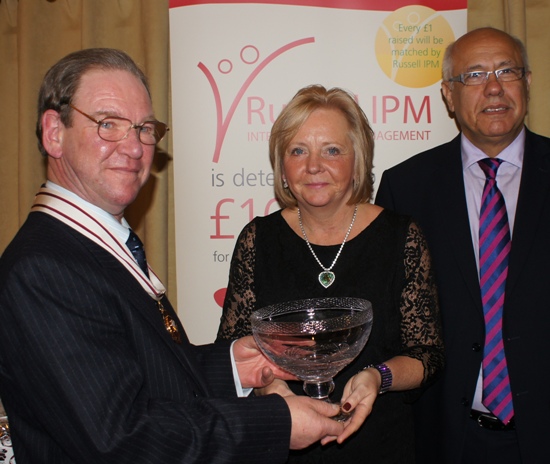 The Queen”s Awards for Enterprise are the most prestigious accolades for businesses in the UK. The process is highly competitive – in 2012 a total of 862 businesses applied but only 209 awards were granted. The winners are announced each year on 21 April, Her Majesty The Queen’s birthday. Click here to read our report on the announcement.

Although well-known in the professional pest control market, Russell IPM is also one of the leading manufacturers of insect pheromone-based monitoring and control products in the agricultural and horticultural markets. It is for one of these products that the award has been granted, the Ferolite trap. This trap was designed and developed to control infestations of the devastating and destructive tomato pest, Tuta absoluta.

After celebrating this second win, does the Russell team have any plans to enter for a third time in 2013? Well, no, not in 2013, but with more new products in the pipeline and one in particular entering final stages of trials in 2013, the company does hope to be in a position to apply for the Queen’s Award for Sustainable Development in future.

Below, some of the guests at the presentation