It is thought rats are to blame for a huge fire that destroyed three coaches and three minibuses at a coach company operations centre.

The blaze broke out at an operations centre in Hedge End, near Southampton on the evening of Saturday 29 December, and, according to the Daily Mail, fire investigators concluded that the most likely cause was a spark from an electrical fault caused by rats chewing through the wires.

The land is said to be owned by a farmer who rents plots out to businesses and individuals.

The fire destroyed six out of the 11 vehicles on the Barfoot and Sons plot at around 17.45 on Saturday, and residents said they saw 40ft flames after hearing an ‘explosion’. There was initial concern that smoke from the fire would be blown across to the M27 motorway, but fire-fighters managed to get it under control, and remained at the site for about four hours.

Steve Barfoot, director of the family coach and minibus hire firm, told the Daily Mail: “If it”s down to rodents, it is frustrating such a small animal caused so much damage and devastation.”

To read the full article in the Daily Mail and to see more pictures, click here. 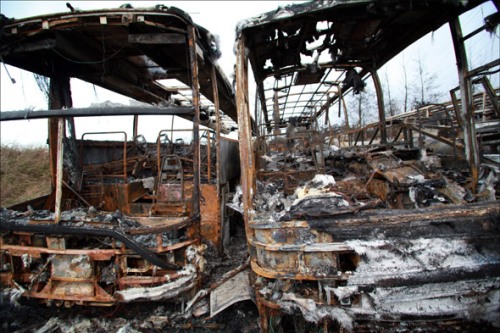 Some of the burnt-out coaches. © Solent