All went well for the third and latest, one-day PPC Live event organised in alternate years to PestEx by BPCA at a venue which moves around the country. Held on 14 March, the venue this time was the Three Countries showground at Malvern, Worcestershire.
With the famous Malvern hills behind, the showground car park was soon filled with pest controllers’ vans.

Early birds catch the butties
As soon as the doors opened the visitors flocked in. Maybe it was the draw of the free coffee and bacon butties that encouraged the early birds, but finding, parking and getting into the event could not have been easier.

According to the organisers, the British Pest Control Association (BPCA), there were 380 visitors, not including the exhibition staff on the 48 stands. Certainly in the morning the exhibition hall was pretty full, but by lunchtime and early afternoon the numbers had dwindled somewhat.

As to be expected there was the usual array of UK-based exhibitors present, joined by a handful from overseas. It’s always good to welcome first time exhibitors, which this time included several offering services and consultancy e.g. Harris Associates, Pest Control In and the vertebrate pest unit from Reading University.

Seminars and outdoor demonstrations
As at PestEx there was a series of practical and thought-provoking seminars covering a range of pratical, technical and business topics.

Venues picked for these PPC Live events also offer the opportunity for outdoor demonstrations. Fortunately the event was sandwiched between the two appearances by the ‘Beast from the East’, so sitting outside to watch these outdoor events was not too cold, so long as you were well wrapped-up. As at PestTech, (organised by NPTA) these always prove very popular, although missing in 2017 – professional pest controllers are very practical people, so really enjoy seeing something practical – be it bird of prey, drone, air rifle or Dave Archer of DKA Pest Control presenting a master class on mole trapping methods – with the emphasis very much on practical success humanely achieved.

A new innovation this time around was the PPC Live Van of the Year award. A pest controller’s van is not only their means of transport, but also a mobile store, their office on the move and frequently their spot for a bit of relaxation. So this new innovation provided the opportunity for pest controllers of all persuasions to show off both their pride and ingenuity through their vehicles. Top spot was judged to be Gary Leek of Pestforce, East Yorkshire. Only four vehicles were shortlisted but competition is likely to get more competitive in future years as this award catches on. 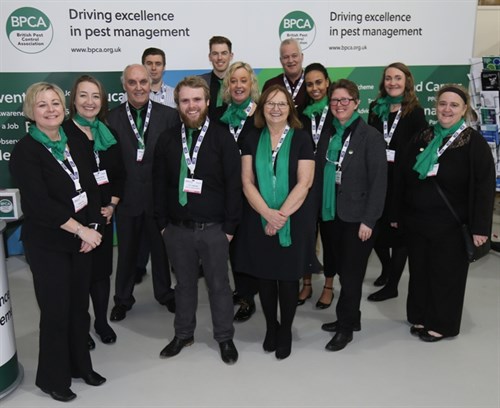