A Channel 4 programme screened on 28 January featured a Leeds couple who are quite besotted with their family of 25 rats.

To the general public, rats conjure up images of disease or vermin, and inspire horror, disgust and fear. But some people feel very differently about these furry rodents – the aptly named Rattrays.

Kate Rattray, a GP in Wakefield, and her husband Kevin are members of the Yorkshire Rat Club and are keen rat enthusiasts. Their brood began with two in 2006 and has grown to 25 strong. Having never had the parental instinct for children, Kate and Kevin describe themselves as a ”weird couple, with no kids but lots of rats”. 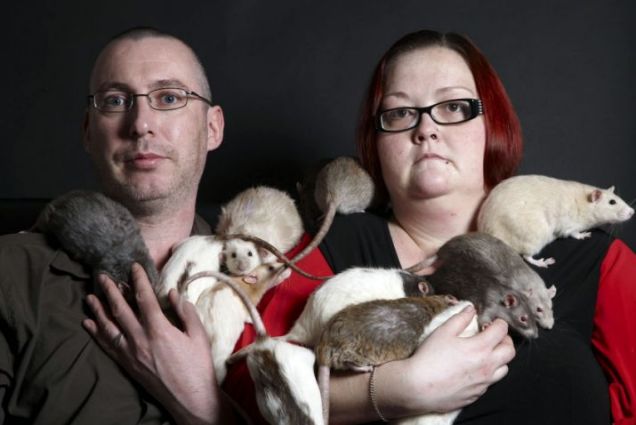 Channel 4’s First Cut film shown on 28 January explores the Rattrays” unique household and their unconventional love affair with rats. From losing a beloved member of the family to throwing birthday parties, this is a portrait of a very different couple, but one who are in some ways exactly the same as any loving parents.

“They make fantastic pets,” explains 31 year old Mrs Rattray. “They are very intelligent and interactive. They definitely have personalities and they’re great fun to spend time with.”

Having grown-up on a farm where he viewed rats as vermin, husband Kevin appears converted, although one wonders if he is just humouring his wife.

To view the whole programme click here – available only until 27 February. Or a shorter clip can be seen by clicking here.

However, if you thought the Rattrays are extreme, this is nothing compared with a man in California who shared his house with about 1,000 rats.

The man”s neighbours called producers at an American television programme Hoarders – rather than animal welfare services – after the rats began tearing apart the house.

A rescue organisation heard about the infestation and arrived to remove the animals. They found the house carpeted with droppings and with the wall insulation ripped up. “They chewed all the way through the walls,”

Lauren Paul, an animal rescuer, said. “There were cages in the house, but the doors were all ope When you walked into the house, you were standing in crowds of rats. They were all around you.”