Being awarded a Queens Award is a feather in the cap for any business. So it is good news that two companies operating within the professional pest control sector both achieved this accolade this year  Rentokil Initial and Russell IPM.
Two Awards for Innovation
Always announced on 21 April, Her Majesty The Queen’s birthday, the Awards fall into four categories and both Rentokil Initial and Russell IPM received their award for innovation.

Rentokil Initial’s Queen’s Award for Enterprise for Innovation was for its RADAR and PestConnect system, in recognition of its leadership position in product and digital innovation for commercial pest control.

This year’s award builds upon earlier success in 2017 when the company was awarded The Queen’s Award for Enterprise for International Trade.

Russell IPM’s award was achieved for the development of the range of pheromone-based Optiroll sticky roller traps used, not in professional pest control, but in agriculture, glasshouses and polytunnels particularly for the monitoring and control of whitefly and thrips.

Like Rentokil, this is not the first time the company has won a Queen’s Award. The first being for Enterprise in 2011 and the second, also for Innovation, in 2012.

Rentokil’s Award for digital pest control
The Rentokil RADAR (Rodent Activated, Detection And Riddance) device is a revolutionary rodent trap that features a unique combination of infra-red technology and fast-acting CO2 instead of traditional poisons.

“We’re delighted to have again been honoured with a Queen’s Award, which is recognition for the hard work and commitment of our 36,000 colleagues across the world.”

This is just one of many innovations currently being developed by Rentokil – details of which can be found in it’s annual report – see pages 22 – 24 regarding the Pest Control division.

A very happy user of RADAR

Russell’s Award for Optiroll
Optiroll Super Plus and Actiroll are two versions of the award-winning sticky roller traps for agriculture pests that Russell IPM launched in 2012. The rolls have been developed as alternatives to traditional pesticides that are used in agriculture to protect fruit and vegetable crops from insect pests. They can be used to both monitor for the first signs of pest infestation, as well as to physically trap flying pests in order to reduce crop damage.

Russell IPM’s managing director, Dr Shakir Al-Zaidi said: “It is an honour to have been expertly selected by the Queen’s Award team as recipients of the prestigious Innovation accolade a second time in our 30-year company history. It is a testament that our on-going efforts to respond to market needs for cleaner, higher quality products for plant protection, are on the right track.” 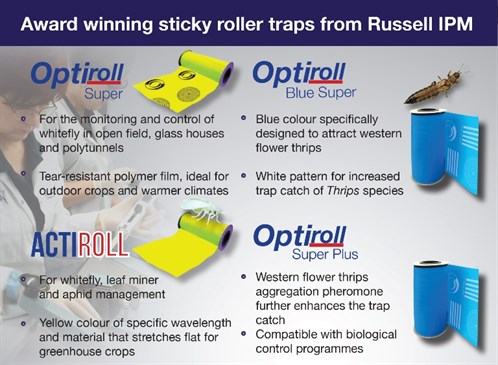