For the second year running, PestTech, the one-day event for pest professionals with a focus on those working at the sharp end, was held at the Arena MK, Milton Keynes. This year on 6 November. Overall exhibitors and delegates alike seemed in buoyant mood.
They say people don’t like change, so following the two previous years, when PestTech was held at two new venues, this year returning to the Arena MK at Milton Keynes felt comfortably familiar. Everyone had worked out where the venue was, and how to get into the massive car park. Registration was once again quick and easy, all exhibitors were in the one big hall, and the seminars were popular and easy to reach with good acoustics. Perhaps, most importantly, there were plenty of places to buy refreshments and have a sit-down. So – all positive. In fact any grumbles or moans were very few and far between!

About the only small crisis was seating fhad to be an emergency call for extra chairs!

Exhibitors were very pleased with the facilities on offer, especially the easy set-up and break-down as their vehicles are close at hand and there is drive-in, covered van access at the rear for unpacking and re-loading after the show. And everything is on the same ground floor level. 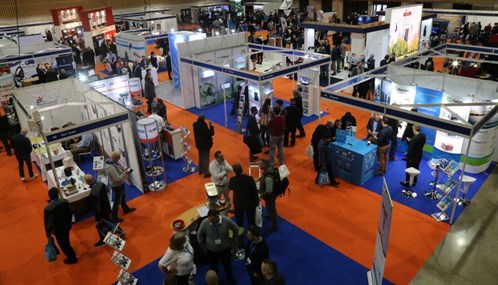 Several exhibitors and visitors commented that they felt visitor numbers were down. However from the figures supplied by the organisers, the National Pest Technician’s Association (NPTA), this was not the case. Everyone entering the exhibition had their badge scanned and figures were up around 100 over last year – when attendance was over 1,000. At PestTech the aisles are big and wide, so plenty of room to move around so maybe it was this that made it feel less full?

Unlike PestEx, the number of international visitors are fewer. Those spotted included Babolna Bio from Hungary as well as InPEST and OSD from Italy.

As far as exhibitor stands went there were 49, virtually identical to the year before when there were 50. What was good to spy were the number of new products, or product enhancements, on the stands – the details of which will be revealed in the forthcoming issue 66 of Pest magazine.

One thing that made PestTech unique when it was held at the Motorcycle Museum was the number of outside events and practical demonstrations. Regrettably, in what is basically an urban environment, these are not possible at the Milton Keynes venue. However, in an attempt to add some practical activity, air rifle target shooting tuition from BSA guns was available on the second balcony.

Speaking to Steve Hallam, NPTA’s chief operating officer, after the event he was obviously delighted and said: “Everyone really seemed to enjoy the show. There’s been very positive feedback and it clearly shows what NPTA is trying to achieve. Going forward we have had several enquiries from potential new exhibitors and we’re keen to hear what delegates felt. We are keen to give delegates more choice.

“As organisers we would like to thank everyone who attended, all the exhibitors and our three prime supporters: Killgerm, BASF and Syngenta. We are delighted with the team at the MK Arena who could not be more helpful and I’m pleased to reveal that the venue has been rebooked for 2020 for Wednesday 11 November,” concluded Steve.

It certainly seems as if PestTech has a new permanent home.